A LOOK INTO THE POUR HOUSE & THE HISTORY OF MACHINERY HALL.
THE POUR HOUSE
The Pour House at Machinery Hall is a full service restaurant that serves Chef-driven cuisine using fresh, high quality ingredients. We feature 30 beers on draft with an emphasis on craft beers from Ohio and beyond. We specialize in craft cocktails and host live music and entertainment. Our passion is to provide our guests with the highest quality service, atmosphere, environment and experience in historic downtown Chillicothe! 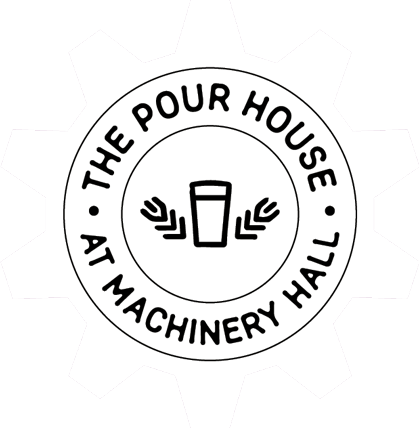 MACHINERY HALL
The Pour House at Machinery Hall is Chillicothe’s original Gastropub. The restaurant opened on June 30, 2017. The menu features recognizable cuisine that is chef driven with an emphasis on craft beer and craft cocktails. The space is designed to welcome friends and family to gather and “eat better, drink local and live social”!

The property was described in the Ross County Register on September 18, 1880. Over the past 135 years, Machinery Hall has gone through various renovations including a 100’ rear addition. The east facing exterior wall features a 19th Century iconic Mail Pouch mural. The building was home to various businesses including a record store and office supply store. In 2016, the current owners of Machinery Hall purchased the building with the intention of opening a restaurant.

In December 2016, a full renovation construction project began. The renovation took seven months. Numerous structural issues had to be addressed including replacing a wooden support beam with a new steel beam that supports the 2nd floor of the building. Additionally, the entire 100’ rear addition was demolished and rebuilt. The rebuilt addition now houses a modern commercial kitchen and stage for live entertainment/private dining, and features a 16’ glass garage door paying homage to the original door used to move machinery into the building. Great care was taken during the renovation to salvage the original history of the building.

Original brick walls have been brought back to life. Lumber from the building has been repurposed throughout, including as the bar top, picture frame around the 1889 map of Chillicothe, beer flight paddles, beer tap handles and wood accent wall. A portion of the original wood floors were refinished and are in use today.

The exterior store front was rebuilt to the original architecture specifications, and historically correct windows were replaced on the 2nd floor which now houses office space. Machinery Hall has been totally rebuilt to 2017 standards, while celebrating its 1881 lineage. The building stands ready for another 135 years of service to Chillicothe.
We invite you to sit back, relax, and enjoy the history and charm of Machinery Hall, and the hospitality, cuisine and beverages of the Pour House. Thank you for being our guest and POUR ON!